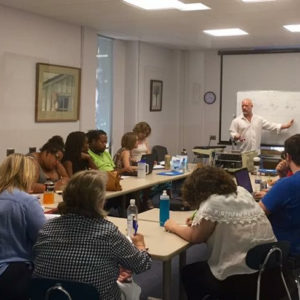 Ultimately, our goal is that you leave the course having formatted your own film script! You get to apply what you’re learning, ask questions and get valuable feedback, thus ensuring you’re walking away with a toolbox full of new story techniques – and the knowledge to use them! (Scroll down for complete syllabus.)

The Big Idea
Where does it come from? Where will it go? Screenwriting vs. Coal mining. Compelling, distinctive, marketable ideas. Choosing a genre. Themes and titles. Settings and arenas. Your new best friend. What you know or want to know.

Charismatic Characters
Heroes, opponents and allies. Do we like them? Do we have to? Personal need vs. want. Strengths and weaknesses. Motivations and destinations. Quirks and arcs. Point of view. Free psychotherapy.

Unforgettable Dialogue
A window to the soul and psyche. Communicating values and morals. Avoiding cliches and noses. Escaping exposition. Let the character write. Intuition vs. Imagination. Keeping it real.

Sign up below and SAVE $26! 100% Safe and Secure – We are PayPal verified. Enroll now and you’ll get an immediate email confirming your seat. Instant confirmation only available online. Screenplay Workshop: Write Your Script in a Weekend!

100% Safe and Secure – We are PayPal verified. Enroll now and you’ll get an immediate email confirming your seat. Instant confirmation only available online. Cost $474 Screenplay Workshop: Write Your Script in a Weekend! 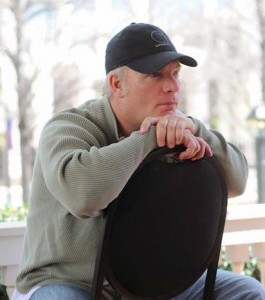 Michael is a writer, director, producer and creative consultant with twenty years experience creating film, television, animation and digital media. He has worked in production for ABC, NBC, CBS and HBO before becoming assistant to Steven Spielberg at Amblin Entertainment on feature films Indiana Jones & The Last Crusade, Arachnophobia, Joe Vs. The Volcano, Always, Back To The Future ll & lll and Jurassic Park. He went onto work in creative affairs at Hollywood Pictures, helping develop the movies Crimson Tide, Terminal Velocity, Taking Care of Business and Straight Talk.

Michael has penned over twenty feature screenplays for studios such as Paramount, Disney, DreamWorks, Fox and Universal, including Vampire in Brooklyn, Home On the Range and Spirit, which won the Academy Award in 2002 as best animated feature. He also served as screenwriter on the animated sequels to Mulan, Lilo & Stitch, Emperor’s New Groove and 101 Dalmatians.

Since his return Michael has lectured at various colleges throughout the southeast including Emory University, Clark University, Morehouse College, Georgia State University and the Creative Circus. He also served as screenwriting mentor for the Atlanta Film Festival, Southeastern Writer’s Conference, Georgia Writer’s Association, and Atlanta Writer’s Club, discovering a passion for teaching he never knew he had. Thus, “Screenwriter School” was born, an entertaining and educational lecture series where Michael shares his wit and wisdom of life in the trenches with aspiring writers throughout the southeast.

Refund policy: Enrollment is limited. If you need to cancel your registration for a class or seminar, please notify shockingreallife@gmail.com by email as soon as possible. Refunds, minus a $25 administration cost, will be remitted for cancellation notifications made up to two weeks in advance of elected seminar. For cancellations made up to one week in advance of the elected seminar, a credit, good for one year, will be issued towards a future Shocking Real-Life class or seminar of the same price. Any cancellation made within one week of the elected seminar results in forfeiture of the registration fee.

The Shocking Real-Life Academy works hard to ensure the quality of its offerings. If you are unsatisfied with any class or seminar, please contact us immediately. We will work with you to make sure you are satisfied.